Drawing the soul and intelligence of a child

Bill Waterson wrote and illustrated a comic daily from November 18, 1985 to December 31, 1995, which exposed a child’s mind 6 year old that together with his toy Tiger, staged all sorts of adventures that over-invested in the imagination of their creator and touched the hearts and minds of many. 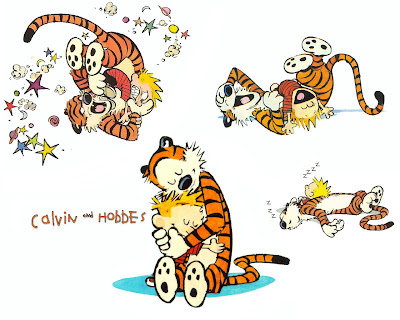 Imagination and creativity are the main ingredients of the stories without a educational goal but helped to many to understand children mind, criticizing the society and above of all, exposing the role of education in childhood.

Once I gave a lecture and I began showing a book that most had taught me about child cognition and when I show Calvin and Hobbes, audience was ready to leave the Auditorium, but examples could not show in a better way how some children watch reality and the way that as adults we mold their minds.

Wikipedia says this famous couple received their name from a French theologian called John Calvino who lived in the 16th century, and Hobbes receives its name as a tribute to Thomas Hobbes, who was an English philosopher born in the 17TH century and no doubt the brilliance of both characters do honor to the pair's minds that gave their them names. 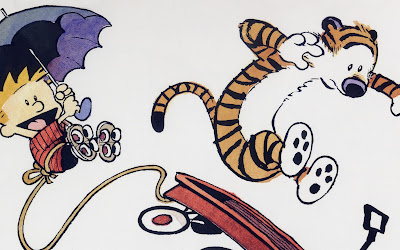 The stories go around a friendship impossible to break between Calvin, an American child and its Tiger toy named Hobbes, who likes to eat tuna, and together live all sorts of adventures using simple elements that are in their environment.

Calvin is the only one who can talk and see Hobbes beyond its figure of Tiger rag.  Calvin’s parents are constantly watching him doing crazy things but almost never intervene in its mental activities. Finally, it does not hurt anyone.

The stories always reflect the friendship and the discoveries that Calvin shares with his Tiger, which always has a phrase to his little friend and rarely seen interacting with parents, which appear in the stories only to substantiate the role of the family and adults in children's lives.

Of course Waterson took advantage of this space of expression to criticize various society sphere, from the incongruity of the parents to educate children, as is the case with this mini story where Calvin is showing signs that it has learned that does not like her mom that soiled the floor... 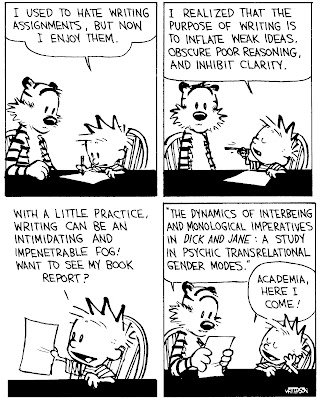 To education as a means of personal development, which also is even stronger as the child is who confronts to society with the firm idea of maybe education is not exactly the best thing for him.

But from a cognitive level that impacts of the history is the ability of Calvin and Hobbes to understand the world, resolve dilemmas and course, adapt to their reality, hence it is not difficult to find examples that explain this child thought, for example the Piagetian notions, where the first instance draws the child's ability to observe the reality and try to explain it but it fails to understand the transformation of the object up to abstract and explain such complex issues as the first movement law of Newton and if you find it hilarious explanation, take into account that only Calvin is 6 years old and uses mental resources at its disposal to explain something that students only repeated or copied a text and that even for an average adult is a complex issue. 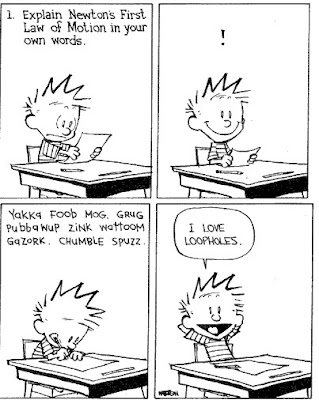 Of course later you will be able to apply the laws of physics not to bother, but as an example that the theories of physics are applied to reality. This reveals a child's capacity to understand and apply the same which are transformed into planning and execution of ideas that are not always well received by adults:

So it is possible to look at the cognitive ability of children beyond what classrooms give in a limited way, sometimes restricting even the inventive capabilities of children.

It is true that this is just a cartoon, but can all children understand the world?.

Of course back then Deficit of attention was not so popular, otherwise Calvin would have ended up with a psychologist who would have undoubtedly applied thousands of tests to ensure that the child had brain damage.

On occasions Calvin shared his imagination with the adults, who do not appreciated it and maybe time has been so he decided to take refuge in Hobbes, with whom he had a Pact of respect and also became his best friend, this allowed him to get away from the world of adults, who harassed him with obligations and meals never enjoyed.

As a result, it was possible to enjoy their occurrences, creative wonders and compelling explanations that were always you sprinkle by the games between them, always together, without barriers of thought, without violence and when the same emerging, everything ended with a hug between the two. 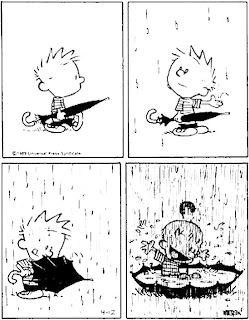 This image is an example of how the author was able to understand the child mind. It is true that the author is an adult, but in only 4 drawings reminds us that objects have a thousand and one uses, same that we cannot in the adult world, where there is an endless list of No´s.

Reflective thinking, use and management of information, Metacognition are just some topics explored in the mind of a child who looked at life beyond what adults are usually allowed with which makes us ask ourselves when did we stop seeing life so simple?.

So beyond school and all its obligations is always possible to have fun for children, and this is something that Calvin understands perfect, because he found out that most of tasks are not read by teachers, did you laugh? Let us reflect a little what we do every day in the classroom, where only inflate weak ideas, poor reasoning becomes dark and inhibits the clarity, and everything sounds so elegant!.

I want to believe author reflected so much this child happiness that helps us to have inspiration every day and give us an example of the child genius that we ignore our rush to watch them grow as men and women of good by, without remembering that today they sometimes children, able to see the different life, and which gradually learning to be afraid of errors and to adult life 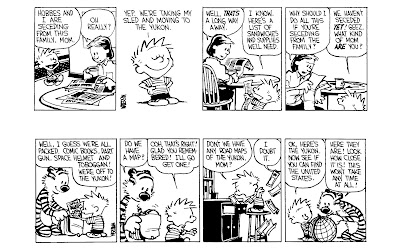 Perhaps that makes this story so sophisticated from the point of view of children's cognitive development, because when the adults look at them, we do it with our own perspectives and dogmatic theories that search to explain the functioning of all, without allowing us to simply listen.

Waterson captured it perfect in this cartoon, where he asks Calvin inspiration and Calvin responds: “Maybe I don’t feel inspired what’s it worth to you?”. 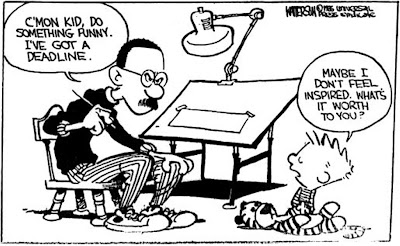 Faithful sample of adults expect a lot from children, but we don't hear them, just give them obligations.

I hope one day to be able to schools to remember that children are more than answers in an exam and the World Bank numbers which guarantee funds that continue to perpetuate an education that binds to a desk and kills creativity. Hopefully one day... we can have many Calvins talking to Hobbes on philosophy, physics or on how to enjoy summers to the fullest.

Note, if you want to see the images so that they can read, just click on either and all images will appear in actual size.
Publicado por Unknown en 6:13 PM