I do not know you but  I find incredible the way that nature uses the energy and resources to create masterpieces, as flowers, honey bees or brains. 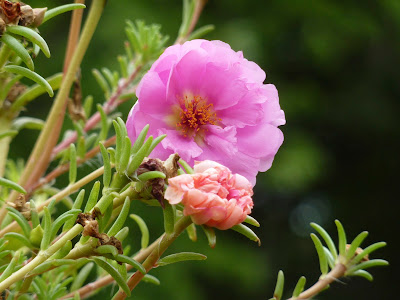 An example of this is brain development, since the nervous tissue formation begins with the formation of a simple tube, called neural tube from the neuroectoderma induction (this is part of the ectoderm that is the outermost cell primary embryo that originates the central and peripheral, nervous systems including some glial cells), this process occurs as part of human neurodevelopment between the third and fourth gestational week and wrapped the most fascinating functions that it is possible to imagine.

But the road is not simple, since once formed the neural tube occurs a differentiation in three dimensions: the first leads to the spinal cord, the second will give rise to stem and brain stem and the cerebellum, while the third portion will develop the cerebral hemispheres.

This stage is called a proencephalic process that occurs between the fifth and tenth gestational week and during which an active neurogenesis (neuron development) and this develops from the neural precursor cells, which have a special feature and is not mature and do not proliferate, because it will have to wait for the next moment for such differentiation (Poch, 2001).

Between the eighth and tenth eighth gestational week, occurs an active neuronal proliferation, the precursor cells begin to differentiate to produce new precursor cells and neuronal cells different of neurons and glial cells (astrocytes and oligodendrocytes).

The speed of proliferation in this period that occurs between the 2nd and 4th month of intrauterine life is impressive since they are around 200,000 neurons per minute, as fast as any kind of thought, this cell proliferation, is known as neurogenesis, this process occurs slowly, and after going through several cycles of cell division, this is stopped, since as we know, that in excess is bad.

Even if it is unknown what starts and then stops the mechanism of proliferation in any region, it is clear that the periods are rigidly determined, although we know it depends on neural factors specific to the region of the brain where it occurs and functions to be exercised, by between what 3rd and 5th month occurs the migration of neurons guided by processes glial based on chemical signals and neural growth factors, mediated by regulatory genes that determine the activity of other genes in a defined sequence and for precise periods and in specific regions.

What has already been observed is that differentiated cells begin to emigrate from ventricular areas (Central) to the more peripheral areas of the brain (neocortex) development.

This is a specific order, which begin first occupy the deeper layers of the cortex layers, while those that start later, occupy the uppermost layers.

This radial migration of neurons to the periphery, uses glial cells as a guide since these form a scaffolding that facilitates the movement of neurons. Neuronal migration occurs mainly in two regions in the thalamus and hypothalamus, where the oldest neurons are pushed by more new neurons, by which the first will be located in the periphery. On the other hand, in regions of the brain structure of laminar, as it is the case of the cortex and the cerebellum, neurons more young people migrate to break through to the oldest, whereupon the latter will sit closer of the neuroepithelium and the more young people on the periphery.

Neuronal migration process takes place between the 10th second and the twenty fourth gestational week, but it is noteworthy that not all cells survive since during neurogenesis and neuronal migration, approximately 50% of neurons undergo apoptosis, meaning that cells die in a programmed way, probably because they do not follow the correct course of emigration or because they do not receive the stimuli of the rest of the networks that are created, but the correct answer is still a mystery.

A certain proportion of the neurons that survive (20%) Trek horizontally and one after radial migration, to allow the formation of lamination (segmentation) cortex, it is so neurons looking his way, motivated by chemical stimuli (neurotrophic factors), extending its structure in one of its ends, resulting in the so-called axonal growth cones.

Simultaneously with the neuronal migration occurs in synaptogenesis (formation of synapses), although this is much more intense between the twelfth and the twelfth fourth gestational week, but persists in a very active way until the eighth or ninth month postnatal (Avaria, 2005; Sanhueza, Nieto and Valenzuela, 2004, Sagan, 2003; Poch, 2001).

Neurogenesis and the subsequent stages associated with this process morphogenic lead to the formation of approximately 100 billion neurons in the adult brain and several trillions of synapses. This implies that a significant number of the 30,000 genes that we have must be involved in this complex process, expressing together in simultaneous or sequential form.

However, she has still not been achieved understand this prodigious process, because a region possessing 20,000 genes, is only 302 neurons and nerve tissue that form is far from having the functionality of the human brain (Sanhueza, Nieto, and Valenzuela, 2004).

So as a result of the differential expression of genes in the course of time, and in different cells of the embryonic structures, given the development process, but this depends on much more than a base sequence of the genome and the history and composition of the genome of the parents.

While the genome gives specificity and individuality that new body, its expression depends not only on bases of DNA, but also the protein and environmental environment in which it is (Vasquez Laslop and Velázquez Arellano, 2004).

As son as intrauterine development finish, we see the birth of a new human being, but even it is true that the neural cells are there, ready to connect with each other, will take between 2 and 3 years until they manage to do it logically, because the relationship between them depend on the needs of the environment.

When brains of the babies are ready to see the light,  they work but they are very immature, partly because the brain needs lot of flexibility to adapt and reply to the environment. This prevents them from performing tasks that other mammals in a few days or weeks after birth, for example, human babies require much effort to set the look, or control the trunk to sit. However, are born with reflexes that will enable them to adapt to the new environment, as a reflection of suction, that will give you food that requires to help its development, although there are others like blinking and crying that will provide you the opportunity to have contact with caregivers (Quintero Gallego, Manaut, Rodríguez, Pérez - Santamaria and Gómez, 2003) .

The number of cells in the fetal brain is between 30 and 70% higher than the number of neurons in the adult. Surplus cells survive for a period of days to weeks, after which, on its own, starts a cascade of degenerative changes and a physiological process of programmed cell death. In the picture below, it is possible to observe the differences between birth and two years of development, although it seems that increased neuronal tangle, in reality there are what are they are less neurons with larger number of neural networks, connections between neurons, i.e. interneuronal communication, which allows a more robust network that ensure more specific skills. 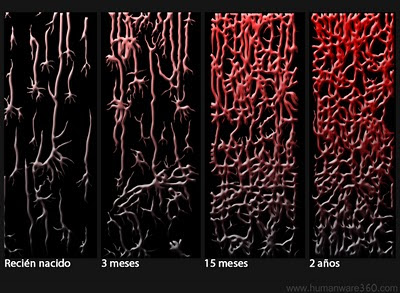 In this sense, found that the selective removal of the synaptic connections, is a fundamental process in the cognitive development of the child, as has been observed relationship between changes in the gray matter of the frontal lobe and the evolution in the performance of cognitive tasks (Chapel, Romero, Maestu, field, Fernandez, Gonzalez Marquis, Fernandez and Ortiz, 2004;) Hubel and Wiesel, 1970).

At this point, important thing is to start the race to connect to neurons. Although the neuronal pruning will be inevitable, since this is a process of survival of the fittest under the Darwinian principle that everything that is not used is discarded, neurons that fail to create medium-term goals that enable adaptation, they will be destroyed, the important thing for the brain is to achieve the process critical enabling that new creature to make it into the world. The critical process will be listening, see (to later make discrimination environment and information) stand up, little by little to control their own weight (around the year of born), recognize the natural mother language  for later use it to communicate and finally walk. 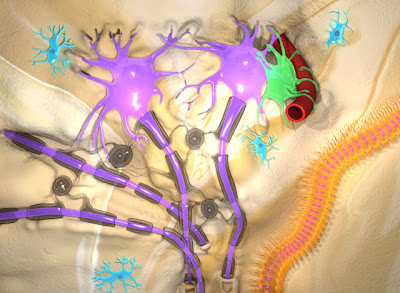 What is achieved with this is process of brain, organization which begins six months of gestation and lasts throughout life. Although the rhythms vary, thus, as already mentioned, during the last trimester of pregnancy and the first two years of life, the pace of organization is quickened, then becomes less rapidly to 10 years of life, to continue so slow during the rest of the life.

During the acceleration phase, occurs a large increase of dendritic extensions and small branch, which has been called dendritic arborization, that form numerous synapses, so that all cells and its extensions are arranged in layers and orient themselves, at the same time causing programmed cell death and differentiation and specialization neuronal, this depending on the interactions with the environment and genetic factors.

So crests of the neuronal branches are, density peaks occur at different ages, but also in different brain areas. Thus one fast and dense development both in the visual cortex and the hearing between the 3 and 4 postnatal months and maximum density, around the year of life can be observed. Against, the growth of the prefrontal area is presented at the same age, but the peak is reached until after the first year of life.

The only exceptions are the granulated cells of the olfactory bulb, cerebellum and hippocampus, which continue its genesis after birth and continue for life (León Carreón, 2003).
However, there is also a regressive phase, which presents a selective loss of synapses, this occurs after periods of great intensity. In the same way that the synaptic formation crests, decreases the time of reduction varies between different regions, for example, the visual cortex synaptic density, between 2 and 4 years, while the prefrontal cortex, takes place between 10 and 20 years of age approximately (Poch, 2001).

Myelination, (which is an overlay of the neural connections by a specialized membrane that allows a proper transmission of nerve impulses), is essentially a post natal process, occurring in cycles, with a default orderly sequence that contributes greatly to improve the functionality of the brain because it produces an increase in the speed of nerve impulse conduction.

In this sense has been found that there is an increase in white matter during childhood, which probably reflects the increase in myelination (Quintero Gallego, Manaut, Rodríguez, Pérez - Gómez and Santamaria, 2003;) Chapel, Romero, Maestu, field, Fernandez, Gonzalez Marquez, Fernandez and Ortiz, 2004; Avaria, 2005).

However, this process, as well as the maturation process, occur at different times, in particular found that the projection areas, mature before the associative, so the latest in purchasing a myelinated appearance are frontal parietal and occipital lobes (Quintero Gallego, Manaut, Rodríguez, Pérez - Gómez and Santamaria, 2003; Chapel, Romero, Maestu, Campos, Fernandez, Gonzalez Marquis, Fernandez and Ortiz, 2004; Avaria, 2005).