Brain plasticity: history of the concept

The term plasticity was introduced in 1890 by the American psychologist William James, in which described the natural modificability of human behavior. Although in the last years of the 19th century, Santiago Ramón y Cajal proposed that these behavioral modifications would surely have a anatomical substrate, attributable to the brain, and those changes of variable duration in synaptic function which arise with origin in external stimuli affecting learning, are modificable by this plasticity. Thus Lugaro and Ramón y Cajal deduced it almost at the same, with different variations of ideas, both explained that learning involves functional plastic changes in the properties of the neurons or their interconnections.

From this perspective, learning may be the result of a morphological change among the interconnections of nerve cells, similar to the phenomena that occur during the formation of synapses in the embryonic life, however, after Cajal’s death, it was adopted a rigid way of looking at the adult central nervous system and it was accepted the idea that once finished its development, anatomy of the brain remained unchanged, except for the degenerative processes (cited in Nieto, 2003).

Since then, the concept of synaptic plasticity has come developed mainly in studies related to memory and learning.

However, even after years evidence about the capacity of our brain to change its functions and to compensate some damage, the importance of this role has come to be appreciated only recently, since studies brain in late 19th century and early 20th focused on the identification of areas of specific performance which gave the idea of a brain that governs its functions in specific areas and thus the widespread idea in the psychology of learning must be obtained in specific periods of time.

Some persons believe, this was thanks to Paul Broca, who in the mid-19th century, identified a certain area in the left frontal lobe-related to language, which was the starting point for the neurosciences focused strictly on localizations of processes. Since then, many others continued describing specific brain areas with specialized functions, such as Broadmann; who described them but with more and more improved of morphological techniques, architectural and neurochemical studies, researchers discovered more details of the brain structure and functional connections.

The enormous complexity of the brain may have contributed to the conceptual rigidity that  was developed in those years, since its organization was known within a whole, the anatomists had to sectorize such knowledge. This motivated to Broadmann to divide the cortex into 52 regions, and descriptions made by constituents showed them separate, and this gave another reason to believe in concept of a rigid, strictly divided brain. This, coupled with studies of connectivity and the absence of concrete evidence of regeneration in the brain (in contrast to organs like the liver which has the capability of mitotic cell duplication), led to believe that it was a body divided in compartments, not malleable (not plastic) and with little ability to recovery after injury, so few Anatomists, physiologists or clinical projected a concept of dynamic adaptability of the brain (Aguilar, 2003b; Poch, 2001, Aguilar, 2005). 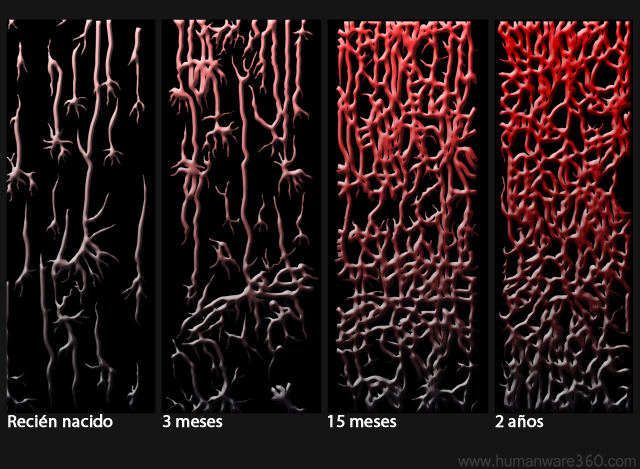 Currently is kind of a simple accept that an adult 30 years old knows much more than a child of 10 years old, and at 70 years old someone knows more than during 20’s, because the cognitive development process goes hand in hand with developing brain in particular the development of adapted neural networks that allow respond to the environment, and all this depends on the genetic information which is endowed to each individual as well as from the mechanisms of adaptation of the environment, so these days, such assertions become searchable thanks to the study of the process called neuroplasticity or brain plasticity (Tubino, 2004 and Ginarte, 2007).

However, it was not until some years later that this concept of neuroplasticity was defined by Gollini (1981) and Kaplan (1983) as a potential of nervous system to change (although it has observed this same capacity in other systems such as the endocrine, respiratory and skeletal muscle). This capacity can modify behavior and allow the adaptation to the environment patterns of conduct, so this ability of central nervous system allows it to never be finished and always change and adjusting as result of the interaction of factors genetic and cultural, but also it’s know that this ability decreases as neurons specialize (Bergado cited in Ginarte, 2007; Poch, 2001).
Defined more broadly, plasticity is the functional adaptation of the central nervous system to minimize the effects of the structural or physiological alterations, regardless of the original cause. This is possible thanks to the faculty of the nervous system to experience structural-functional changes detonated by influences endogenous (internal) or exogenous (external), which can occur at any time of life. Some researchers explain that this includes learning in its entirety; more specifically, there is evidence of morphological changes such as neuronal branching after learn a new skill.

While another group of experts, with a more intermediate position, considered it as adaptive capacity of the central nervous system to modify its own structural and functional organization, since plasticity mechanisms may include neurochemical changes,  at the parenquima, receivers or structures. Likewise, functional plasticity is accompanied by a structural plasticity, since there is also evidence of cooperation between brain areas (Aguilar, 2003b).

In the same way, it has been observed that there is also a great ability to communicate between neuron-glia, which collaborates on brain plasticity (either by creating new connections or removal and cleaning of the existing) (Aguilar, 2003a, b).
In response, it should be recalled that major cellular kinds of nervous tissue are the neurons and glial cells. Neurons, cells that are highly specialized in quick, message reception and transmission have a small body and multiple branches that cover an extensive area, allowing you to optimize your intercom, making them malleable to the needs of the cerebral environment (Nieto, 2003).

It is thus that the synaptic strength can be altered in the different periods of development and range from milliseconds to months.

The cellular mechanisms of these changes are transitional modifications of neurotransmission and in longer alterations, changes in gene expression, so it can be said that there is a continuous renovation of the organization and neuronal maturation (Aguilar, 2003a; Aguilar, 2003b; Castroviejo, 1996; Poch, 2001).