Division of brain by lobes


Usually on books we see the brain divided into halves, they are two hemispheres, the right and left, each hemisphere consists of two indivisible structures: cerebral cortex and white matter. The first consists of the body and the thin extensions of neurons (main cells of the nervous system) and the second by thick extensions or axons, and none of these elements can operate in an isolated manner. The surface of each cerebral hemisphere forms folds that are separated by a deep space the online media in whose depth is the Corpus Callosum that connects both hemispheres. 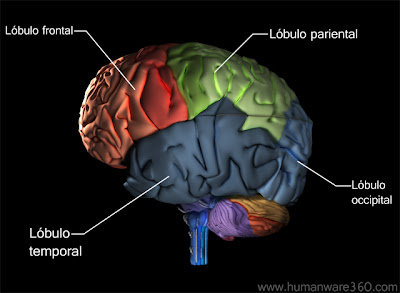 In order to facilitate the description of the brain, it’s usual to divide each hemisphere into lobes which are named according to the name of the cranial bones under which are located and thus have the frontal, parietal, temporal and occipital lobes. There are processes attributed to each of the lobes, however, it is known that the brain works jointly.

This division is somewhat arbitrary between back and front because the term can be ambiguous, for example, if we talk about prefrontal cortex, is the anterior cingulate prefrontal? so this division should be used only as a scheme and not like real division.

The frontal lobe is located in the most anterior part of the brain. Hence all the muscles of the body are represented and its role is to design individual movements of each; it also stores programs of motor activity gathered as a result of past experience.


Moreover, also allows the relationship between vision and the human bipedal position and appears to be functionally linked with more cognitive processes that emotional such as introspection and the coordination of stimulus-driven thinking and independent thinking.


Another division is given by the parietal lobe, which is located on the lateral surface of the brain, near the crown, back and above the central fissure. Its main function is to receive and integrate different sensory modalities.


One of the multiple tasks processed by this lobe is the recognition objects placed in the hands without the help of the view, even manages information about the shape and size of objects relating to past experiences; It also allow the ability to read and design maps, since it allows orientation in three-dimensional space and the ability to use symbols, so also has a part in the development of the language, an injury to this area produces alexia, known by  the difficulty to decipher the writing and lesions in this lobe are causing greater impairment, intellectual and of everyday life.


Meanwhile, the occipital lobe, is located in the posterior part of the brain, at the height of the Crown, its function is to relate the visual information received by the primary visual area with past Visual experiences, allowing you to recognize and appreciate what is being.


In the occipital lobe is where the world is actually displayed. Lesions in this area undermine the visual capacity; in some cases patients perceive only visual field side, reporting black spots on the lateral fields. If the lesion is not very big, you can report only points or spots which move along with the movements of the eyes.


To conclude with this brain division include the temporal lobe, which is also located on the sides of the brain. In this area at the same time are auditory areas that relate to the reception and interpretation of sounds, as well as the sensitive area of the language known as Wernicke's area, which allows the compression of speech writing, i.e., complete the process of reading of a phrase, understand it and read it aloud, in this sense the chain of events has the task of connecting with the Visual auditory stimuli.


Lesions in this area can result in various difficulties for the written expression, even when the language ability is not affected, because sometimes the individuals have the ability to write but not read, while sometimes they can distinguish numbers but not the letters, either naming the objects but not the colors; also can be affected the ability to recognize faces, even of the people closer, even if a person is able to recognize animals or inanimate objects. This shows the division of brain tasks and the complexity of their integration.


In both sexes, the frontal lobe is approximately 38% of the hemispheres (with a variation between 36 and 43%); the temporal lobe, the 22% (ranging between 19 and 24%); the parietal lobe, 25% (with an oscillation between 21 and 28%), and the occipital lobe, 9% (with an oscillation between 7% and 12%). These differences, although subtle will have some impact in learning processes, since they show a trend, which is by no means determinant, that men have better ability visuospatial and women better verbal ability.


Although the brain is a cluster of processes that seem chaotic, actually separate studies have shown that there is a certain order, although still not known at all.